It makes perfect sense to recruit the entire workforce to help in the battle to counter the threat of terrorism, but will a CT vigilance role mean staff need an SIA Licence?

Terrorism – The Threat Level is Severe – An Attack is Highly Likely

A key component of any CT measures is ensuring ALL staff are aware of:

The more ‘eyes’ the better. Right?

It makes perfect sense to recruit the entire workforce to help in the battle to counter the threat of terrorism.

If the people who are going to carry out a ‘CT vigilance’ role (along with their primary function e.g. Stewards, Bar staff, cleaners, etc.,) have been hired in (i.e. not employed in house), then, by virtue of the Private Security Industry Act 2001, they will be carrying out a ‘Licensable Activity’, which would require them to hold a current SIA Licence.

Now, although it has very recently highlighted that bag checking/searching is a ‘Licensable Activity’ requiring operatives to be SIA Licence holders, the Manchester Arena Inquiry has, so far at least, chosen not to recognise this. Nevertheless, the interpretation above is unarguable given the wording in the definition of Manned Guarding activities sitting there in black and white as an Act of Parliament.

When it is finally recognised, the additional expense of providing SIA Licensed operatives will be very unwelcome to venue owners who, on past experience, may well choose to avoid paying it altogether by not involving all staff in the CT measures – and that will inevitably compromise everyone’s safety!

So, is it time to re-write the law?

Or, should we all just keep quiet about what we know and carry on? 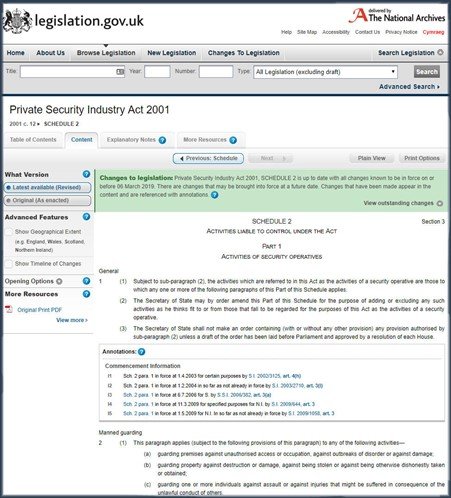